1776 the Musical opens Thursday at PJC

1776 the Musical opens Thursday at PJC 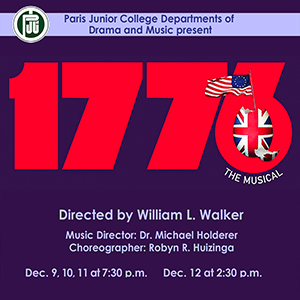 “‘1776’ is a journey through the creation of the United States of American amid showings of the good, the bad, and the ugly,” said William L. Walker, drama instructor and play director. “It shows the history of the creation of our nation as these flawed men navigate through loyalists’ ideas, treason, and slavery, to establish a new nation. Funny, gritty, and raw - it is the story of America.”

Written by Peter Stone and Sherman Edwards, the musical takes place during the summer of 1776 as the nation is ready to declare independence... if only our founding fathers can agree to do it. “1776” follows John Adams of Massachusetts, Benjamin Franklin of Pennsylvania and Thomas Jefferson of Virginia as they attempt to convince the members of the Second Continental Congress to vote for independence from the shackles of the British monarchy by signing the Declaration of Independence.

“It’s been a lot of work, but it’s also a lot of fun. In the past month or so we’ve had to rehearse a lot so I’m excited for opening night,” said sophomore and drama major Annabel Doss, who plays Andrew McNair, Congressional custodian. “Thankfully, I am not singing role. I get yelled at a lot and it’s fun. You can come learn a little bit about the Declaration of Independence while enjoying the theater production. Everyone’s done a bunch of character work and I’ve gotten to learn things about the historical characters. There’s a lot of humor built into the show and the songs are getting stuck in the entire casts’ heads.

One of the most unconventional of Broadway hits, “1776” puts a human face on the pages of history as we see the men behind the national icons, proud, frightened, uncertain, irritable, charming, often petty and ultimately noble figures, determined to do the right thing for a fledgling nation.

“It’s been a different experience working with so many people,” drama major and stage manager Andy Johnson said. “I don’t think there’s been a show that I’ve worked on with this many people. That’s been challenging but fun to adjust to. There’s more opportunity to work in different roles since PJC’s drama program is smaller. Normally at a big four-year college you’ve got to wait until you’re a junior or senior to be a stage manager. In the spring semester I’ll get to be a stage manager and production manager for two productions, so I get as much experience as I want. This [‘1776’] is a fun show with some great music and the community members’ involvement brings a lot to the table and has helped push the students to meet them on that level. So it’s been really fun.”

“This is my first time doing anything like this,” said music major and sophomore Rebekah Veien, who plays piano for the musical. “I’ll admit it has been stressful, but it’s really cool to be a part of such a big production and you’re kind of leading everyone. They’ve all worked really hard on it; it’s funny; it’s educational; and it’s a good show.”

“This is the first time I’ve been on stage since the pandemic started. This play is dear to my heart,” said community member and PJC alumna Sally Boswell, who plays Stephen Hopkins of Rhode Island. “Paris Junior College did this play in 1976, when I was a student here. I couldn’t get a part then becuase they didn’t cast against gener. They needed 27 guys, so they found 27 guys and two girls with incredible voices. So I didn’t get a chance to be in the show and now I am, kind of rounding out my acting life. I’ve seen some incredible talent, commitment and dedication. This has been fun.”

“This is a story that we all know about, the signing of the Constitution,” said sophomore drama major Connor Kirkley, playing Colonel Thomas McKean of Delaware. “But it’s interesting because you don’t hear much about how we got from point A to point B and it gives us light on some lesser known characters who played an important part in founding our country. I’ve also learned a lot from this production mainly in the fact that acting is a lot more than just acting. It’s a lot of backstage stuff going on and of nights spent at home. I do a lot of tech work, but acting is something that I was not familiar with, so  I’ve gained a better understanding of the whole process. People should come see this if they care about history, if they like a funny show, if they like a solid musical, if they want to have a good time; it’s a fun show.”

“I have a feud against McKean,” said sophomore Celia Hagler, playing George Reed of Delaware. “I’m the only one from Delaware against the Declaration, though I end up signing anyway. It’s my first time being in a musical at PJC. I like the people and it’s a very family-feeling atmosphere. This is historical and funny and it may take the audience a few seconds to get the jokes but they’ll be laughing.”

The musical opens on the Duane Allen Stage in the Ray E. Karrer Theater at 7:30 p.m., Dec. 9-11 and at 2:30 p.m. on Dec. 12. Tickets are $15 general admission, $10 senior adults/students, $5 with a donation of a new toy for local charities, or free with a valid PJC faculty, staff, or student ID. Tickets are available by cash or check only at the door. For questions, please email pjcdrama@parisjc.edu.