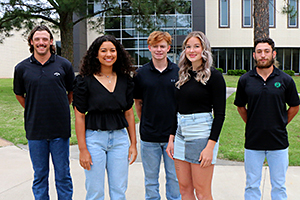 PJC nominees for the Distinguished Service Award, the highest honor a student may receive are, from left, Beau Brewer, Jayda Carter, Sean Curtis, Rachel Roebuck and Brendan Concannon. The graduation ceremony will be at 7 p.m. in Noyes Stadium on Friday, May 13, 2022.

So far, nearly 475 students have applied to graduate from Paris Junior College this semester, and 256 of those plan to walk in the Friday evening commencement ceremony at 7:00 p.m. in Noyes Stadium, May 13, 2022.

A highlight of PJC's graduation ceremony is the Distinguished Service Award (DSA), the highest student honor given at PJC. It has been presented to a PJC graduate since 1935, when it was first given to Louis B. Williams, who later became president of Paris Junior College. The Award recognizes academic achievement and service to PJC and the community and is given to an outstanding graduating student. This year five students have been nominated.

Beau Brewer, a 2020 graduate of McKinney Boyd High School in McKinney. A returning member of the Dragons Baseball Team and of Phi Theta Kappa, the two-year college honor society, he was named 2021 All Region Outfielder and named to the President’s Honor List for academic excellence three times.Brewer donates his time volunteering at the local Food Pantry, Red River Valley Boys and Girls Club, and the Paris Animal Shelter.  He was a 2021 Paris Junior College Homecoming nominee and crowned 2022 Mr. PJC. Following graduation from PJC, he plans to further his academic and athletic career at Western Kentucky University.

Jayda Carter is a 2019 graduate of Copperas Cove High School in Copperas Cove. She is a returning member of the Dragons Softball Team and a member of Phi Theta Kappa. Carter was a 2022 Miss PJC nominee and has volunteered at the Downtown Food Pantry and as a Salvation Army Bell Ringer. After PJC, she plans to pursue her education at a four-year university with the goal of becoming a travel nurse.

Brendan Concannon is a 2020 graduate of Flower Mound High School in Flower Mound, and a returning member of the Dragons Baseball Team and of Phi Theta Kappa. He was named to the President’s List for academic excellence three times, and was chosen to appear in the 2021 Texas-New Mexico All Star Game.  Concannon has volunteered at the local Food Pantry, Red River Valley Boys and Girls Club, and the Paris Animal Shelter. Upon graduation from PJC, he plans to transfer to a four-year university and continue his baseball career and pursuit of his Bachelor’s Degree.

Sean Curtis is a 2020 graduate of Marble Falls High School in Marble Falls, Texas. A returning member of the Dragons Baseball Team and of Phi Theta Kappa, he was chosen to appear in the 2021 Texas-New Mexico All Star Game. Curtis was a 2022 Mr. PJC nominee and has donated his time volunteering at the local Food Pantry, Red River Valley Boys and Girls Club, and the Paris Animal Shelter. Following graduation from PJC, he will continue playing baseball at Texas A&M University – Corpus Christi while pursuing his degree in Accounting.

Rachel Roebuck, a 2019 graduate of Royse City High School in Royse City, is a returning member of the Dragons Women’s Soccer Team and was named to the 2021 All-Region Team. She is President of the Student Government Association, and has twice been named to the President’s List.  She served as Region 3 Treasurer of the Texas Junior College Student Government Association for 2021-2022, and was a nominee for 2021 Homecoming Queen and 2022 Miss PJC. Roebuck will continue her soccer and academic career at the University of North Texas and pursue a Bachelor’s Degree in Criminal Justice.

Graduating students need to arrive at the Rheudasil Learning Center (library) at 6:00 p.m. to line up on May 13. Families and friends will go to the west side of Noyes Stadium to find seats before graduates march in at 7:00 p.m. to begin the ceremony. More details are available at www.parisjc.edu/graduation and a map of campus is at https://www.parisjc.edu/main/paris-map/.