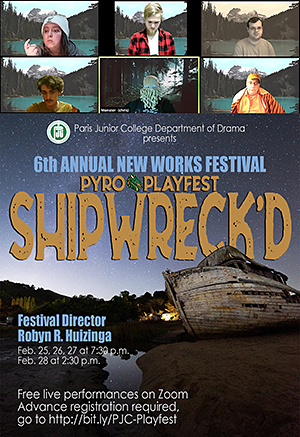 At top, virtual rehearsals were held to prepare motion, backgrounds, and other elements for a virtual performance. This photo features those involved with “The Wreck.” Below, the poster for the 6th New Works Festival: Pyro Playfest - Shipwreck’d.”

The “Pyro Playfest: Shipwreck’d” features original works that have not been previously performed. Originally slated to open on the Duane Allen Stage in the Ray E. Karrer Theater last spring, the Playfest was just one of many planned events derailed by the COVID-19 pandemic.

“This Playfest ended up having the perfect title,” said PJC Drama Instructor and Festival Director Robyn R. Huizinga. “We had no idea when we chose it that it would be a perfect metaphor for the past year with so much going on in the world. I think we’ve all felt a bit shipwrecked. All of the characters in the plays are dealing with problems big and small, and some are handling them better than others. I couldn’t think of a more apropos group of plays for audiences to watch right now.”

Plays in order of performance and associated cast include:

1. The Wreck, by Ella Doss: Three siblings go exploring. What they find will change their lives forever. (Casts will perform on alternating days.)

2. The Sandstorm, by Dwayne Yancey: A look at the last days of life on Mars.

3. Siren’s Last Call, by Matthew Weaver: One guy, four girls, and three beautiful voices all meet at the local bar. What comes next is killer.

4. One Lost Coconut, by Drew Austri: Finding happiness and sanity in the little things so you can be way less sad.

5. Siren, by Austen Naron: A play about accepting the things you cannot control and making peace with it and yourself (Content Warning: Suicide).

Advance registration is required for each performance. To register go to https://bit.ly/PJC-Playfest. After registering, you will receive a confirmation email containing information about joining the live performance on Zoom. For questions about the performance or the PJC Drama program and available scholarships, email pjcdrama@parisjc.edu. Download the Playfest program here.