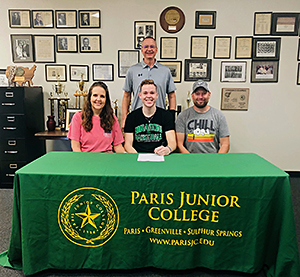 Shown at Aymond’s signing are, from left seated, Kim Aymond, Preston Aymond, and Cody Derr, and behind them is PJC Athletic Director and Head Men’s Basketball Coach Bill Foy.

Paris Junior College basketball player Preston Aymond has signed with the University of Central Oklahoma to continue his education and basketball career. He will play for Coach Bob Hoffman at UCO in Edmond, Okla.

"We are excited for Preston signing with Coach Hoffman and UCO," said PJC Head Men's Basketball Coach and Athletic Director Bill Foy. "He was a tremendous leader for us. After tearing his ACL in the last game of his high school career, Preston worked extremely hard on his rehab and basketball to get this opportunity. He will be a great addition to the Bronchos."

Aymond, of Mesquite, Texas averaged 80 points per game and 39 percent from the three point line for PJC.

"I learned to push through the hard times and come together collectively through the challenge of the year and win games," said Aymond. "This was definitely a new experience playing at a high collegiate level. The fact that I was doing it with great teammates made it a blessing."

Aymond is looking forward to UCO.

"UCO was accepting and made me feel I was part of the team the first day I was there. They really believe I can help them get a ring."